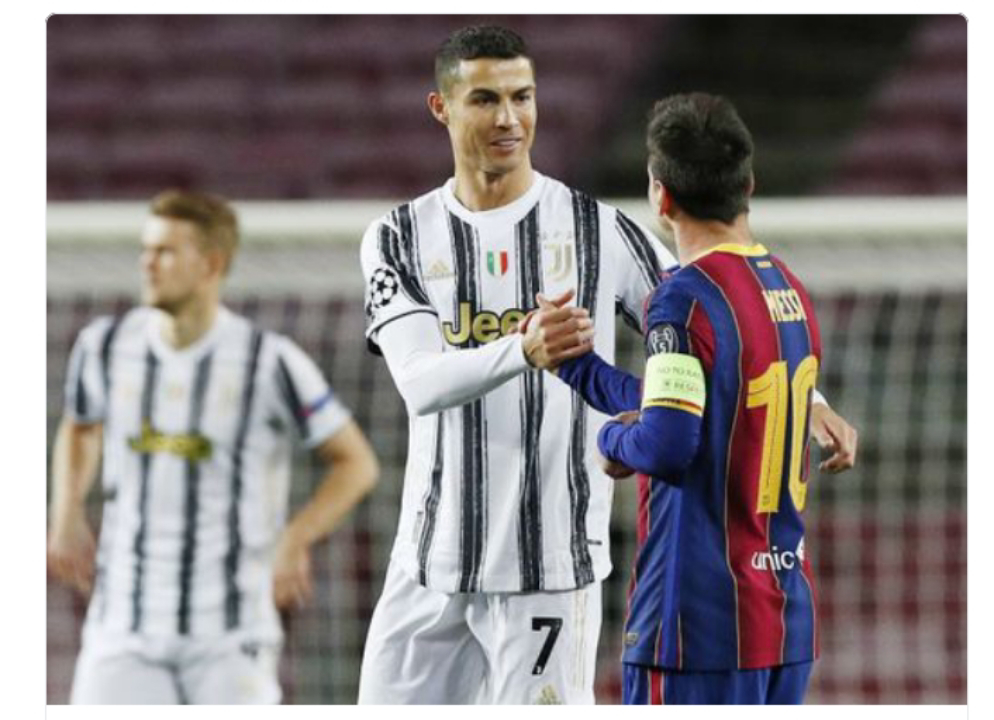 In the UEFA Champions League group match late on Tuesday, Uventus beat Barcelona 3–0 at home.  Cristiano Ronaldo scored 2 goals from the penalty in the match.  At the same time, Leonel Messi’s team could not score a goal despite 7 attacks.  Both these Group-G teams have already qualified for the Super-16.
In the match, Cristiano Ronaldo scored the first goal from penalty in the 13th minute.  The second goal was then scored by Weston McKechnie in the 20th minute.  This is the first time in the history of Champions League, when the opposition team has scored 2 goals in 20 minutes against Barcelona in his home.  Ronaldo scored the third goal of the match.  This goal was also scored in the 52nd minute from penalty.
Yuventus avenge their previous defeat
With this victory, Uventus avenged their previous defeat to Barcelona this year.  On 29 October, Barcelona defeated Uventus 2–0.  Messi scored a goal from the penalty in this match.  However, Ronaldo did not play this match due to being Corona positive.  Barcelona occupy the top in Group-G.
Both teams qualified for the Super-16.
Spanish team Barcelona and Italian club have qualified for Yuventus Super-16.  Yuventus won by a margin of 3 goals to reach the top of Group-G’s points table.  Barcelona occupy the second position.
Lazio team reached knockout after 20 years
The second match in the Champions League was played in Group-F between Italian club Lazio and Belgian team club Brugge.  The match was a 2–2 draw.  Lazio and Borussia Dortmund have qualified for the Super-16 from this group.  Lazio reached the Champions League knockout after 20 years.  RB Leipzig’s upset, beat Manchester United
RB Leipzig from Group-H overturned to the Super-16.  The team defeated Manchester United 3–2.  United are out with the loss.  The other team to reach the knockout from this group is Paris Saint-Germain (PSG).  This team has legendary players like Neymar and Kylian Embappé.
The head-to-head Champions League has featured 11 matches between the two teams so far.  In this, Barcelona defeated Yuwents 4 times, while 3 times they faced defeat.  There were 4 matches between the two draws.  Barcelona have also scored more goals than Yuventus.  The match between the two has so far yielded 23 goals, with Barcelona scoring 12 and Yuventus scoring 11 goals.
Barcelona has won the Champions League title 5 times
Barcelona won the title 5 times in the UEFA Champions League.  The team has been champions in 1992, 2006, 2009, 2011 and 2015.  At the same time, Yuvents won the title twice in 1985 and 1996.  The record for winning the most titles is to Real Madrid.  The team has been the champion 13 times.
Only Messi – Ronaldo won the last 11 Ballon d’Or awards
Messi was voted the world’s best footballer on 2 December.  He won the Ballon d’Or Award for a record sixth time at a ceremony in Paris.  In this case too, he overtook Ronaldo (5 times).  However, only Messi and Ronaldo have won the last 11 Ballon d’Or awards.